All in One Machine

Washers and dryers have been combined before — the Bendix company made the first one in 1953, and GE followed in 1956. They disappeared off the market because they didn't work very well, and had heating elements more like an oven than a dryer. 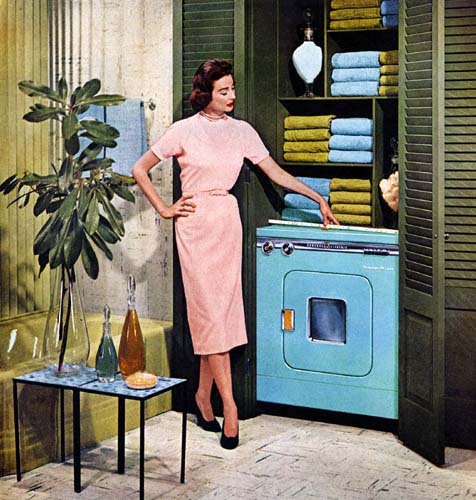 Other Parts of the World

If you see combos in the U.S. advertised by major manufacturers, look closely at the specs — it's their European model. If the machine has a 24" cabinets (which all of them do!) they look like the machine on the right in that photo. They're tiny, and they are ventless and take forever to dry.

Big Laundry intentionally keeps those on the market, almost to guarantee you won't buy one, because they're ridiculous, and will instead buy a Real Dryer, which is how they make all their money. That's the conspiracy part — they really don't want anyone to believe that it's possible to make a great, vented washer/dryer combo.

If you have limited space, perhaps you are considering a "stacker", where the dryer is on top of the washer. For any given manufacturer, these are usually not their best models — they are sort of "apartment models" and they are often smaller and have fewer features than the premium models. Plus they're hard to use — you have to load the dryer way up in the air.

What we think of in the U.S. as a "dryer" did not exist in other countries until very recently. Laundry has simply been line-dried in most places. Houses outside the U.S. typically do not have a 4" hole in the wall for the dryer vent — especially if you live in the U.K. in a house with stone walls that are a foot thick....

Because of the lack of dryer infrastructure (and familiarity with vented dryers), essentially all existing combo units on the market are ventless drying technology.

A ventless dryer evaporates water from your clothes into the air, then condenses the water vapor back into water and pumps it down the drain.

Remember middle school science, when water evaporates, the air becomes "saturated" with water vapor and it rains? That's kind of how a ventless dryer works — or doesn't work, because it's always a rainy day inside the machine, and evaporation slows down. Drying times in a ventless dryer can be 5 or 6 hours.

We have pioneered fully vented combo machines, which dry just like conventional, U.S. dryers, by blowing the wet air into your back yard.

It works much better than ventless drying technology.

Our machines are full size and fully vented. It matters.

A fresh perspective on technology in the laundry industry, brought by seasoned veterans of Silicon Valley.